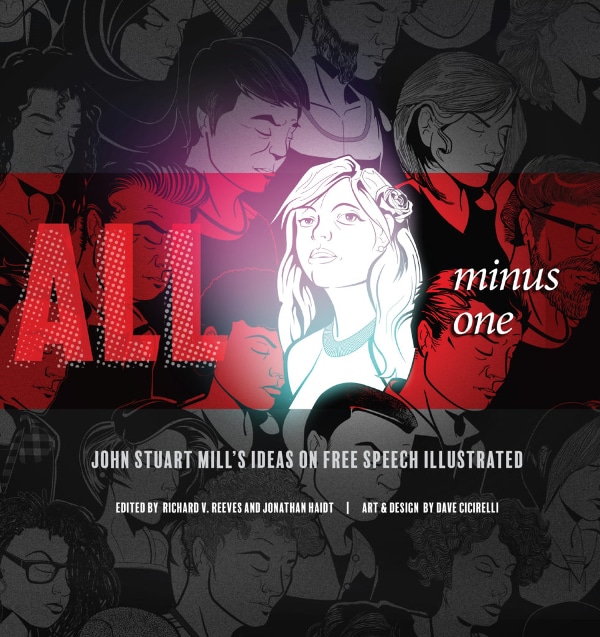 Heterodox Academy has released an edited version of John Stuart Mill‘s arguments for tolerating unpopular speech (from chapter 2 of On Liberty) in a recently released book called All Minus One. I think it’s great.

I read On Liberty in college, and it was one of the few books that I was required to read that really influenced me. But, I remember that much of it was a bit difficult to get through, so I really appreciate the editing that was done to make this more accessible to a modern audience. And, this edition seems as relevant today as it was when On Liberty was written.

I’m not one for making books mandatory, but if any books were to be made mandatory for incoming college students, this should be one of them. I don’t really know how many of the current students are in favor of obstructing unpopular or controversial speech (I’ve heard very different reports on this) but enough of them do favor such obstruction that it seems to happen far too often. And, the trend doesn’t seem good.

Mill’s main arguments for tolerating unpopular speech boil down to:

These seem like very strong arguments to me, especially as fleshed out by Mill, and they deserve to be considered by those would obstruct unpopular speech.

But, they’re only persuasive to the extent that people value the truth.

People who care more about group cohesion, or shielding people from uncomfortable facts, won’t find them very convincing. Those of us who care more about learning better theories and getting closer to the truth seem to be losing ground lately (in the court of popular opinion). Hopefully I’m wrong about this, or the trend will reverse itself.

Of course, it’s not always wise or kind to gratuitously argue against cherished beliefs. People should exercise discretion and we should criticize them when they fail to do so. But, that’s not the kind of thing that should be enforced by coercion. Nobody is wise enough to make these decisions for everyone else (and, the ability to win elections certainly doesn’t demonstrate that someone has such wisdom). It’s much better to leave it to social pressure (which can change over time when better arguments are made) to peacefully persuade people to improve than to give anyone the power to do it coercively.

As long as there are people who wish to dissent from orthodoxy, and others who wish to hear them, we should allow that to happen, peacefully.

Sometimes this will be painful; but, the alternatives are worse.